A pair of Northern Cardinals feed each other. flySnow / iStock / Getty Images Plus

When spring is here, songbirds do more than break out the gorgeous melodies to woo the ladybirds. Some strut their bold colors. Other courtship rituals seem to tell a story about the male’s ability to be a good provider and parent during nesting season.

Given the round-the-clock demands of incubating eggs and finding food for hungry babies, females should have high expectations! That's why males need to show their worth in the form of these courtship rituals.

To help you appreciate what’s taking place in your backyard, here’s a sampler of romantic gestures songbirds present as part of their spring courtship rituals.

The male Northern Cardinal performs a song and dance for the object of his affection. First, he poses, head held high, crest raised, turning and bending to show off his bright red feathers to his tan-colored crush. Then he shifts his weight from one leg to the other as he sings. He’ll also present offerings of food.

The House Wren takes his mate on a tour of several potential nesting sites, for which he’s built a series of hastily built dummy nests, singing sweetly all the while. The female accepts the overture by choosing a site, and gets to work rebuilding the nest.

The Scarlet Tanager chooses a lower vantage point from the female, droops his wings and fans his tail to display the black and red contrast of his gorgeous plumage, all while hopping on a branch. 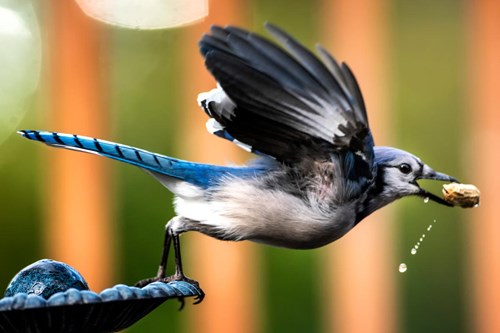 A Blue Jay takes flight with a peanut in its beak; perhaps a gift for a mate. Blightylad-infocus / iStock / Getty Images Plus

Blue Jays present a food offering to their beloved, such as seed or even a peanut they grab from the bird feeder. Once they’ve established a bond over this sacred meal, the two are mated for life, and the male’s tokens of affection presented in the form of food continue.

The Pileated Woodpecker performs a showy dance. He bows, scrapes his long bill and circles the female in a series of side steps. This is a species that also mates for life.

Throughout the rigors of nesting season, help the birds in your backyard stay well-nourished by filling your feeders with a high-quality, nutritious mix. Lyric Supreme Mix has 12 ingredients including sunflower seeds and nuts, giving birds the energy they need to raise a family.

4 Bird Behaviors to Watch for This Spring

Learn the reasons for behaviors the birds in your neighborhood display as they choose mates, build nests and tend to eggs.

The Truth Behind Springtime Nesting Myths

Here are the facts about some common misconceptions around nesting birds.