Bluebirds Flourish From Coast to Coast 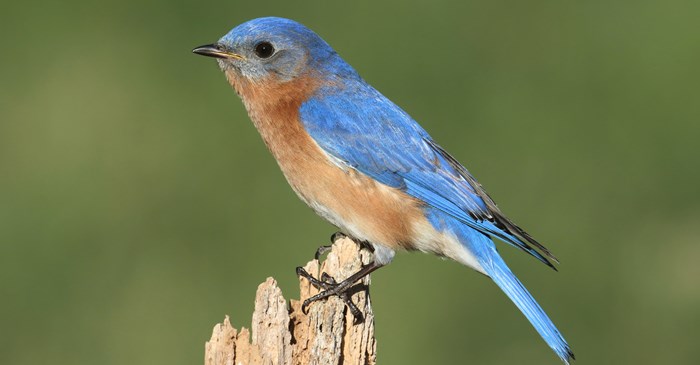 One bluebird species or another can be spotted across the continental U.S., from mountainsides to the plains, from open forests to parks. From coast to coast, these are the three main species to watch for:

In any case, bluebirds are cavity nesters, but unlike other species that like to build a nest in the hole of a tree, bluebirds don’t excavate their own opening. They’ll take on an abandoned woodpecker cavity or settle in an opening of a dead tree.

The good news for backyard birders is that bluebirds easily take to nesting boxes. The Cornell Lab of Ornithology has an excellent online guide to help you find the right location as well as the dimensions of the box and opening.

During nesting season, male bluebirds will scout out a good nesting site, and vie for female approval by placing some nesting material into the hole, perching above it and waving his wings. When it comes to Mountain Bluebird romance, it’s all about location, location, location; these females pay scant attention to the male’s size, color or song.

When it's time to build the nest and incubate the eggs, female bluebirds do all the work. Bluebirds often raise more than one brood a year, and will even reunite in later seasons.

Their diet is comprised mostly of insects, but bluebirds will also feast on berries and finely cut nuts. To draw the bluebird into your yard, set up that nesting box and fill your feeder with Lyric Fine Tunes to help them supplement their food source.

Make Your Yard a Bluebird Haven

There are plenty of ways way to encourage these sought after birds to come to your yard.

Choosing a Location For a Nesting Box

To increase the number and variety of birds visiting your feeders, remember that they require adequate shelter, cover, and nesting accomodations.

All birds need a dependable supply of fresh, clean water for drinking and bathing.