Break Out the Binoculars for the Lively Bushtit 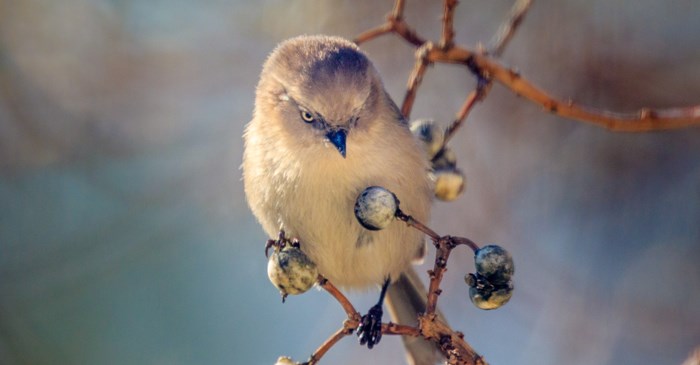 Have you been lucky enough to spot one of these cute, rounded, long-tailed birds at your feeder?

Bushtits are small and stocky with a relatively long tail, rounded heads and a tiny black bill. They are often described as fluffy or chubby in appearance, but have an overall brown/gray coloration. Female Bushtits have pale eyes, while males have dark eyes.

Aside from being among the tiniest songbirds, Bushtits are worth breaking out the binoculars for because what they lack in coloration, they make up for in personality. They live in flocks almost year round, foraging for food. They also use this social network for their safety. When they spot a hawk or some other bird of prey, they create what birders call the confusion cloud. They move closer together, repeatedly trilling, which creates a swarm or noise that confuses the predator, according to the book, Birds at Your Feeder: A Guide to Feeding Habits, Behavior, Distribution, and Abundance, by Erica Dunn and Diane L. Tessaglia-Hymes.

Their nesting behavior is equally fascinating. Rather than nesting in isolated pairs as other songbirds do, many Bushtits get a couple of helpers, usually males, to assist with feeding and raising the young birds. At night, the entire group — parents, helpers, nestlings and all — piles up in the nest to sleep!

Speaking of nests, the Bushtit builds this wonderful and intricate hanging structure that looks a little like a sock with a round opening near the top. They are stretchy, made from spiderwebs and plant material. These sac-nests take a month or more to build.

What’s interesting about one of the tiniest songbirds in North America is that while the Bushtit is not a frequent visitor to the bird feeders out in their western habitat (They are found throughout Utah and Nevada, as well as parts of Colorado, Arizona, New Mexico, Texas, California, Oregon and Washington), their visits to bird feeders have been steadily rising for nearly 30 years. Biologists aren’t sure why, but the Bushtit appears adaptable to suburban settings and land development. They can be seen living in flocks almost year round, clinging upside-down on branches and twigs, reaching for the insects and spiders that make up much of their diets.

If you happen to live near their natural habitat, fill your feeders with Lyric Chickadee Mix, and see if you can attract a flock to dine on the peanuts and pistachio pieces that give them the energy boost they need to get through the winter months.

Western Tanager Spends Its Summer in the Mountains

Look to the treetops in summer to catch a glimpse of this hard-to-spot western songbird.

The Mysterious Call of the Varied Thrush

Its simple song can be heard in the forests of the Pacific Coasts and northern Rockies.

This bird gets its name from the juniper tree, where it nests throughout the pinyon and juiper forests of the Western U.S.