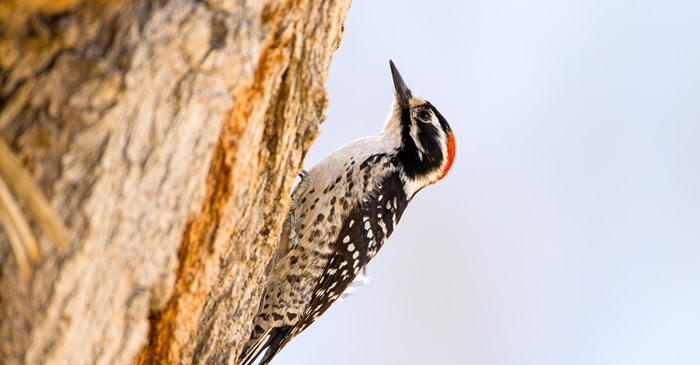 Nuttall's Woodpecker on a tree | BirdImages / iStock / via Getty Images

Where to find Nuttall’s Woodpecker

In California, look to the oaks and find Nuttall’s Woodpecker. In fact, if you have a mature oak in your yard or a nearby park, spend some time observing it. Eventually, you’ll spy the striking black-and-white plumage of this handsome woodpecker, effortlessly rounding the branches and trunk for spiders, beetles, and other insects. They’re unique to California, with a range spreading from the southern woodlands all the way up to the northern coast.

Nuttall’s Woodpecker reminds many birders of the well-known Downy Woodpecker. Another species with a strong family resemblance is the Ladderback Woodpecker, with which it shares the distinct vertical black-and-white barring up the back. To tell the difference between the two, just remember the Ladderback’s barring goes all the way up the back. The male Nuttall’s Woodpecker has a large red spot on the back of its head. The white face striping gives them a theatrical appearance. 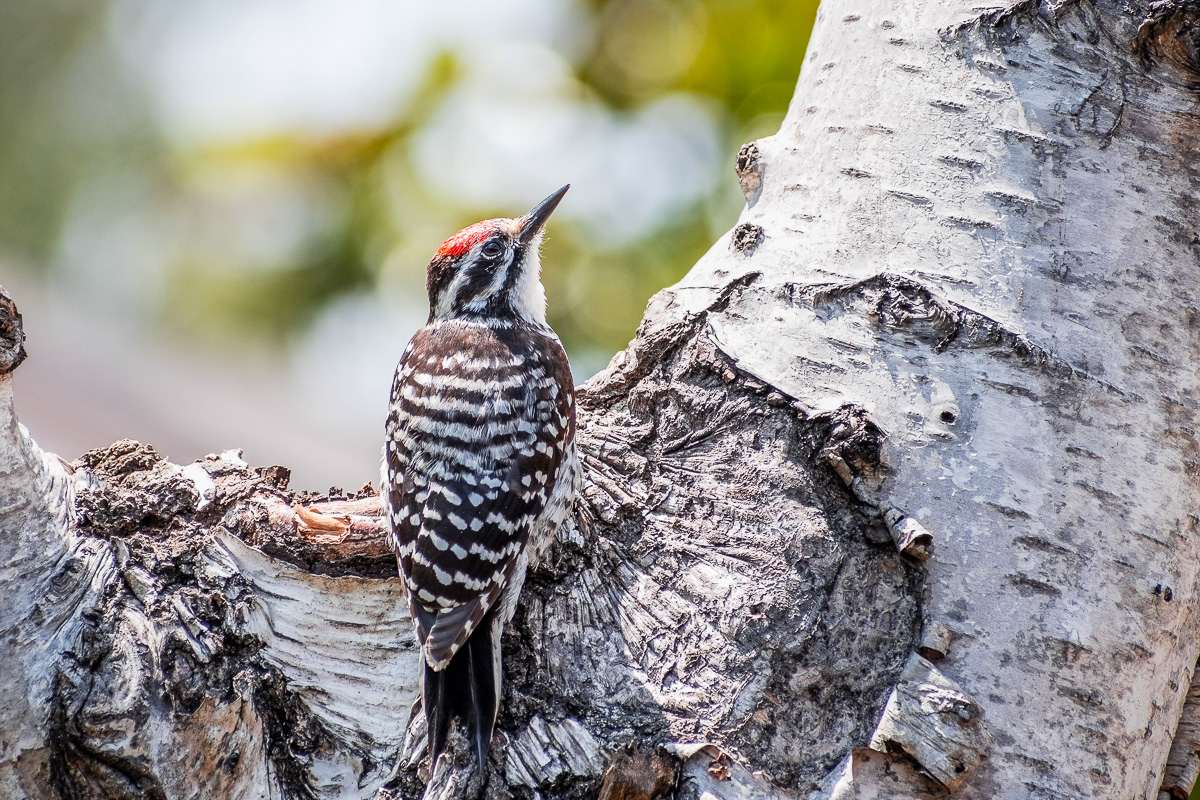 What sound does Nuttall’s Woodpecker make?

Like other woodpeckers, Nuttall’s Woodpecker doesn’t sing, but the male will hammer to claim territory and woo females. Listen for the distinctive rattling "prrrrrrrt!" they make year-round.

Where does Nuttall’s Woodpecker nest?

Each spring finds the male patiently excavating a new hole in the softened wood of a dead or dying oak or some other deciduous tree for a nesting site. The finished nesting cavity extends almost 11 inches deep and has a thick layer of wood chips to cushion the eggs.

Later, when the woodpeckers are through with the site, other cavity-nesting birds will reuse it. These birds live in a limited range, depending on these trees for insects and a protective nesting site. Maintaining a wild healthy habitat with oaks, cottonwoods, and alders is key to the survival of these woodpeckers and other species.

Nuttall’s Woodpecker usually mates for life and maintains a territory year-round. When nesting season is finished, their relationship is more of an alliance. Other than maintaining and defending their territory against other Nuttall Woodpeckers, mated pairs don’t interact much during the non-breeding season.

How did Nuttall's Woodpecker get its name?

Nuttall's Woodpecker gets its name from a British ornithologist who wrote what was then the go-to guide to North American birds. William Gambel, a young associate, traveled to Las Californias in 1843 to collect specimens for Thomas Nuttall and brought back one of these small black-and-white woodpeckers, among others.

How to attract Nuttall’s Woodpeckers to your feeder

Though Nuttall’s Woodpecker thrives in the woodlands of California, they’re also at home in large suburban yards and park areas. Like many woodpeckers, Nuttall’s Woodpecker enjoys a bit of suet. You can also tempt them with chunks of high-energy nuts and fruit in a platform feeder. Lyric Woodpecker No-Waste Mix provides a mess-free way to get an up-close look at the colorful birds in your backyard.

How to Attract Woodpeckers to Your Feeder

As colder weather moves in, expect more woodpecker sightings at your feeding station. Here's how to draw them in.

Take a Closer Look at the Downy Woodpecker

The smallest of the North American woodpeckers, the Downy Woodpecker can be found throughout the U.S. and Canada.