What Do Birds Do With All Those Seeds? 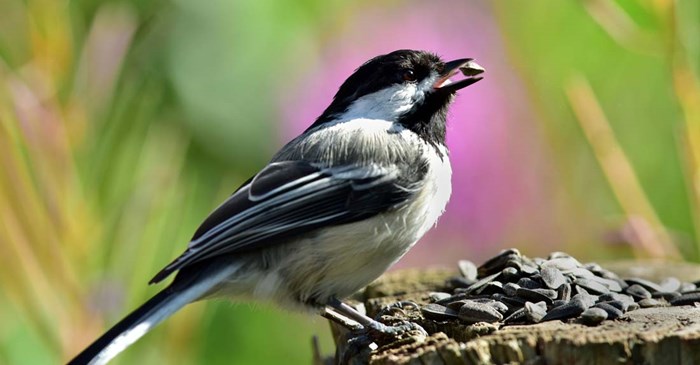 A black-capped chickadee takes a seed to store for later. iStock / Getty Images Plus

Have you ever wondered why some birds visit your feeder again and again throughout the day, taking sunflower seeds “like there’s no tomorrow?” It’s not just because they’re hungry—these birds are actually planning for tomorrow.

In late fall, chickadees, titmice, and nuthatches increase the rate at which they visit bird feeders, but they don’t eat the extra seeds they take right away. Instead, they hide the food in bark crevices, needle clusters, knotted branches, and other nooks and crannies near feeders.

This behavior is called “caching.” By storing seeds, the birds ensure they will have something to eat later when food is scarce.

Caching has long been of interest to ornithologists and animal behaviorists, and their research has taught us some amazing things about the behavior and the birds that perform it.

Chickadee caching is impressive, but Clark’s Nutcrackers—relatives of jays and crows found in the mountains of western North America—take caching to a whole new level. These birds can establish thousands of caches containing a total of 100,000 seeds in a single year.

Nutcrackers are also important seed dispersers for a number of tree species. When a nutcracker forgets to return and eat a cache, the seed may germinate into a young tree. Whitebark pines in particular are reliant on nutcrackers to move their seeds around the landscape. Taza Schaming, a PhD student at the Cornell Lab of Ornithology, studies the relationship between the nutcrackers and pines in Wyoming and the conservation implications of their mutualism in light of an introduced disease which is killing whitebark pines in the West.

So next time you see a chickadee fly away from your feeder with a sunflower seed, watch closely and see if he hides it nearby—don’t let him see you though: chickadees are less likely to cache seeds when they know potential thieves are watching!

*Article content republished with permissions from Cornell Lab of Ornithology, 2018.

Clark's Nutcrackers establish caches with hundreds of thousands of seeds a year. iStock / Getty Images Plus
Black-capped Chickadees have amazing memories and can recall the location of their caches for 28 days. Charles Kroger

Is It OK to Feed Bread to Birds?

Many people toss bread to birds, but some say it's unhealthy. Is this true?