American Expansion: Birds That Have Widened Their Range

Once sold as the ‘Hollywood Finch’, the House Finch was previously only found on the west coast until it was brought to the east coast and sold by pet shop owners in the 1930s. Brian E Kushner / iStock / Getty Images Plus

Did you know some of your favorite birds are actually “new” to your region? At one time - in many cases - about a century ago, their habitat was limited to a more confined area. But in many ways, urban expansion has paved the way for them to expand their territory. Let’s take a look.

It’s difficult to find a place in the U.S. where these birds can’t be found gathering at a bird feeder. Until 1940 or so, you couldn’t find any east of the Rocky Mountains.

Back in the late 1930s, enterprising entrepreneurs captured some House Finches and brought them back East, where they were marketed to Main Street pet shops as “Hollywood Finches.” That decade dawned the Golden Age of Hollywood, starring some of the best-known performers of the century. So peddlers of Hollywood Finches apparently hoped to convey the mystique and magic of sunny, abundant southern California.

As it turns out, catching birds and keeping them as pets was quite illegal under the 1918 Migratory Bird Treaty Act — one of the oldest wildlife protection laws on the books. After agents from U.S. Fish and Wildlife raided a Brooklyn pet shop selling Hollywood Finches, other pet shop owners sprang into action. They headed out with their birdcages and set the finches free in the park. Enough of them survived to raise clutches of babies, and over the decades, the House Finch expanded its territory throughout the Northeast, spreading to the Southeast and the Midwest.

With the exception of the Great Plains, House Finches now can be found just about anywhere across the continental U.S. Unlike other invading species, (such as the House Sparrow and the European Starling), bird lovers have welcomed the arrival of these handsome red birds.

How a southern bird became the Northern Cardinal

Cardinals are so often depicted in snowy scenes in Christmas greeting cards. Weirdly enough, these birds used to be a creature of the southern states and the tropics.

About 150 years ago, birders began noting scattered sightings of Northern Cardinals in the Midwest and New England. Today, we find they’re well-adapted in cold-weather regions, never migrating in the fall. Even in the past 30 years, birders have noted healthy boosts of Northern Cardinal populations in far-north places like Minnesota, Michigan, Maine, and southeastern Canada. This is an expansion, not a shift in territory, as they’re still found throughout the southeastern U.S.

Why did the cardinal expand its range? Humans may have something to do with it. Urban developments, with their tree and shrub filled parks and backyards, create a cardinal-friendly habitat. As bird feeders have become more popular, scientists believe they may play a big role in helping cardinals thrive throughout the winter. 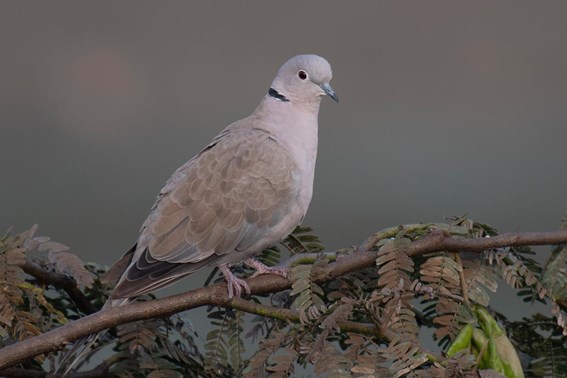 The Eurasian Collared-Dove is a close relative of the familiar Mourning Dove, with the big difference being the dark collar of feathers that the Eurasian Collard Dove possesses. Tahir abbas / iStock / Getty Images Plus

If you’ve been observing birds for more than a decade, you may have noticed this recent arrival visiting your feeder. It all started back in the 1970s when a pet shop burglary in the Bahamas led to the escape of a group of Eurasian Collared-Doves, which originally came from Sri Lanka and India. Twenty years ago, they were found throughout the state of Florida. Thanks to the abundance of backyard trees and bird feeders, these cooing birds rapidly expanded their range until, in 2014, Eurasian Collared-Doves were found living in the Pacific Northwest.

When welcoming birds to your yard, you can’t go wrong filling your feeders with Lyric Supreme Mix. Packed with nutritious chunks that birds love, including sunflower seeds, cracked corn and a variety of nuts, it's the right mix to draw the widest variety of songbird species to your backyard.

Three billion birds have been lost in the last 50 years, and Dark-eyed Juncos have been greatly affected. Read about ways you can support them in your backyard.

Will the Pandemic Help Songbirds?

Have you noticed more birds out than ever before? It could be that the Coronavirus shutdowns are benefiting backyard songbirds.