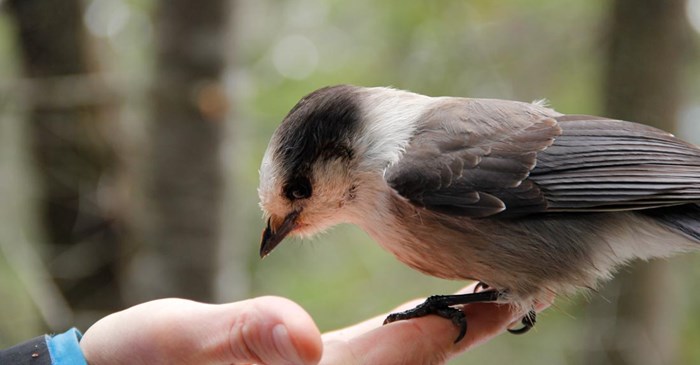 Hunters and hikers are often confronted for handouts by the Canada Jay. G. Gallo/iStock/Getty Images Plus

The Canada Jay is one of those birds that confounds just about every expectation. As a very curious bird and one that is always searching for food, they will readily approach people for a handout. Hunters and hikers alike enjoy their encounters with these fluffy gray and white birds in the woods.

Found in every province in Canada, the Canada Jay is also well-known in conifer forests of the far northern U.S., as well as the mountainous West. Despite the heavy snowfall and subzero temperatures that befall these regions, they don’t migrate and are built to survive and thrive.

In fact, Canada Jays actually nest in the winter. Thanks to their unique survival skills, they have plenty of food on hand — plant matter and high-protein insects — to feed themselves and their broods of chicks until the arrival of spring.

Scientists believe that early nesting gives young Canada Jays a key survival advantage. It gives the new generation of birds ample time to develop the needed cognitive skills to build their own food caches for the following winter.

Their feats of food-caching are nothing short of astonishing. In the late summer and early autumn, the Canada Jay stays busy storing nuts, mushrooms, berries and meat it has foraged around the forest. Using its saliva, it creates sticky packets of food called boli. The boli sticks fast to their chosen hiding spots: under bark, tucked in pine needles, or in the fork of a tree. In a single season, the Canada Jay is capable of storing up to 100,000 food packets. Like other jays, their memory recall of their hiding spots is excellent.

The Canada Jay is well-known and loved by Canadian birders. So when its original name was restored from a 1957 name change to Gray Jay, it was cause for celebration. There is no better bird to embody the Canadian spirit, because the Canada Jay is “loyal, tough, intelligent and friendly,” according to Canadian ornithologist David Bird.

If you live in their range in the far northern U.S., Canada Jays will readily visit platform, tube or ground feeders. Choose a filler-free high-energy blend, such as Lyric Fruit & Nut High Energy Mix, and enjoy the show.

The Canada Jay, with its thick fluffy plumage, can be found throughout northern North America. S. L. S. Ye Gauthier/iStock/Getty Images Plus

Learn how adaptations help these winter wanderers breed further north than any other songbird.

The Common Redpoll is a Winter Visitor to Watch For

If you live in the northern U.S., look for these hardy, red-capped birds in winter months.

This intriguing sparrow comes in two distinct color types that are associated with personality differences.