5 Fun Facts About the Northern Cardinal 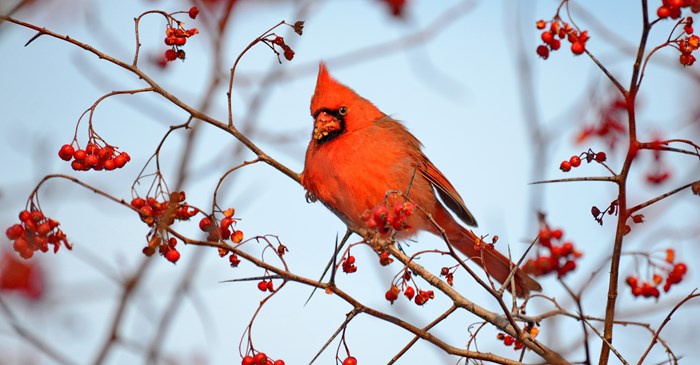 The berries of the dogwood tree are a favorite of Northern Cardinals. iStock/Thinkstock

1. Cardinals get their red feathers from food

While female cardinals are light brown, the red pigment in the male cardinal’s feathers comes from carotenoids in their food. If these pigment-triggering foods are in short supply, their feathers may fade to a more brownish hue.

2. Humans have helped them spread and prosper

Back in the 1880s, the Northern Cardinal was mostly a bird of the Southern U.S. Since then, their range has expanded to the North and Midwest, especially along the Missouri and Mississippi Rivers. Why? They like our landscaping. The trees and shrubs we plant provide just the cover they're looking for.

And during the nesting season, the male is the female’s assistant. While she's building, he'll carry nesting material to her. Unlike most female songbirds, female cardinals sing, usually while sitting on the nest. That’s the male’s signal to bring her some food.

Late in the summer, don’t be alarmed if you catch sight of a bald cardinal. Chances are, it’s a sign they’re in the midst of a late summer molt. Like other songbirds, they're just shedding those old, worn feathers to make room for a fresh set. Cardinals just happen to lose all their head feathers at one time!

5. They dine in twilight

Some evening, as the sun is setting, switch off the lights, and sit somewhere that gives you a clear view of your feeder. You just may catch the telltale tufted silhouette of a Northern Cardinal come in for a landing to crack open a few more sunflower seeds. Set out a special mix for these special birds. Lyric's Cardinal Mix features a blend that's sure to attract these seed-loving birds.

There are few sights more rewarding for many bird watchers than a flash of red from a cardinal against the white snow.

How to Set Up Your New Bird Feeder

Find out what to consider when selecting the perfect spot for your new backyard bird feeder.