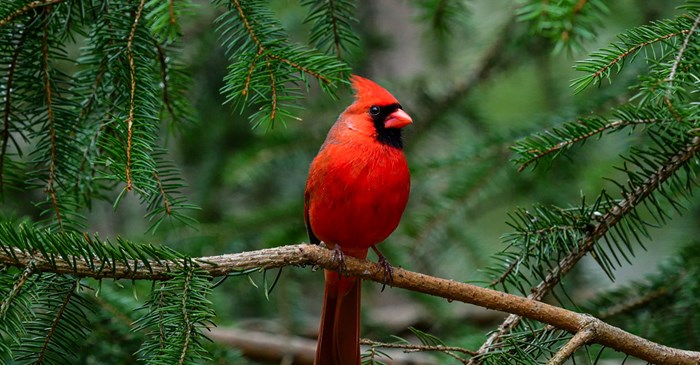 Illinois is home to more than 400 bird species. With access to Lake Michigan and its number of refuges and state parks, there are plenty of habitats to catch sight of a wide array of bird species. Bird feeders also draw in an array of colorful visitors. Here’s a look at some of the highlights in the land of Lincoln.

More than 400 bird species can be found in Illinois. With access to Lake Michigan and its numerous refuges and state parks, there are numerous habitats to see a diverse range of bird species. Bird feeders also attract a variety of colorful visitors. Here are some of the top feeder birds in Lincoln's homeland.

It’s fitting the Northern Cardinal is the top feeder visitor in Illinois, because it’s also the state bird. But did you know that the cardinal is a relative newcomer to the northern states? Starting two centuries ago the cardinal began expanding its habitat northward from the southern U.S. Scientists credit its success to the proliferation of parks and urban tree plantings.

The Downy Woodpecker brings a charming presence to any backyard. Though they subsist on insects in the summer, they’re easily drawn to birdfeeders as long as you include plenty of black-oil sunflower seeds, nuts, and fruit pieces. Males and females have the same black-and-white checkered body plumage with white bellies. Males, however, have a red spot on the backs of their heads.

The House Finch can often be found gathering at feeders in flocks. As the name indicates, they tend to gravitate toward human habitats. Like the Cardinal, there was a time when Illinois was far from its native habitat. Originally, they flourished throughout the western U.S. generally west of the Rocky Mountains. When captive finches were set free in New York’s Central Park, they survived, adapted, and expanded.

The appearance of the Red-bellied Woodpecker is an event, with their striking black-and-white checkered plumage and bright red heads. They’re known to store food in the crevices of trees, so if they make regular visits to your feeder, they just might be stocking up for the winter.

The signature move of White-breasted Nuthatches is scaling the side of a tree, making their “peeping” calls. If you see one in your backyard, you’ll know they’re on the search for insects, beetles, and other bugs they can find in the bark.

How to attract birds to your backyard in Illinois

Illinois lakes, woods, and open fields provide plenty of habitat for colorful birds. If you have a yard, a deck, or even a condo window, setting up a bird feeder will pay off with plenty of visitors.

To attract the widest variety of feathered friends, start with a high-quality mix that provides plenty of nutritious nuggets that birds love to snack on. Black-oil sunflower seeds are a perennial feeder fave, along with peanut pieces, safflower seed, nuts, and dried fruit.

Make your feeding station more inviting by including a birdbath and adding native flowers to your landscaping. Some species to consider: Illinois rose, echinacea, aster, black-eyed Susan, blazing star, and sunflower.

Millions of birds pass through Illinois on their migratory route, so keep feeders out and well filled. You might be treated to new-to-you birds that are passing through.

Here is a list of the top feeder birds in Illinois as identified by 300+ birders who participated in Project FeederWatch:

To attract the greatest variety of birds to your feeder, your best bet is a premium mix that never skimps on nuts, black oil sunflower seeds, and other high-energy nuggets that birds love. Pick up a bag of Lyric Supreme Mix and enjoy the show!

Looking to learn more about the bright, recognizable Northern Cardinal? Check out these 10 fascinating facts!

Check out these 10 fascinating facts about the House Finch.